The day started slowly. It was raining hard outside, we were "socked in" (the clouds and fog were thick), and we were sore from the day before. There wasn't much motivation to rush out the door. 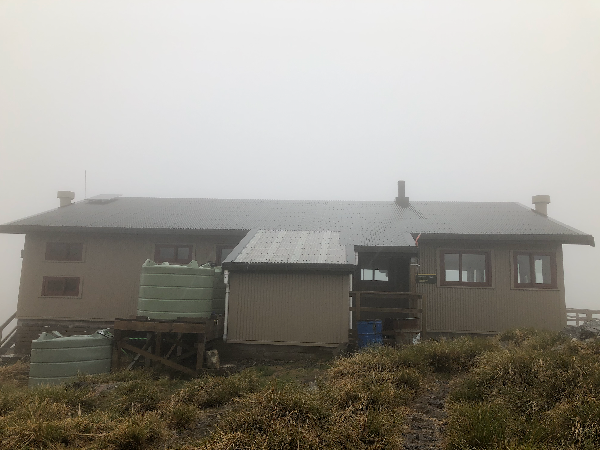 The couple, Eric and Meg, were friendly and chipper, and we all four quickly fell back into fun and interesting conversation. When we finally decided to roll out, we agreed to hike together, as the weather was pretty terrible and a trek back along the ridge was out of the question, which meant we had only one reasonable route back. Eric and Meg made the polite disclaimer about "being slowpokes" and we could leave them behind if their pace was too slow for us.

We had no idea the journey would be so challenging and precarious that we would stick together as a team the whole way back, and become fast friends in the process. 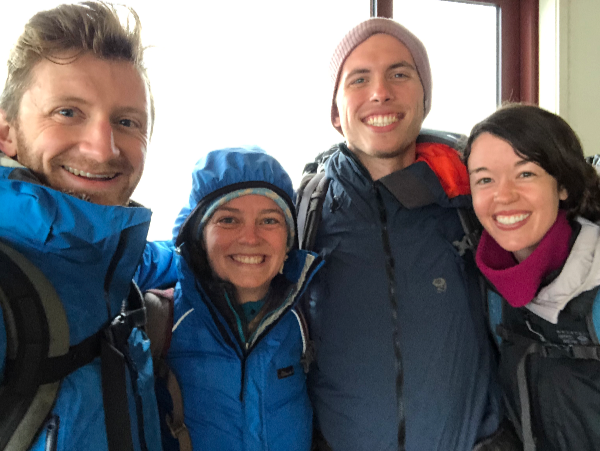 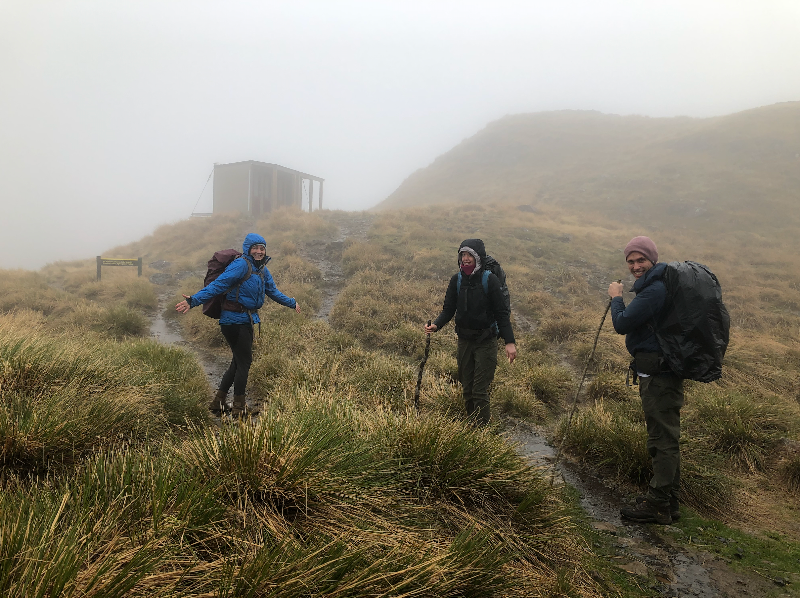 Fully geared up with rain coats, rain pants (for me at least), and trash bags for our backpacks (they had a spare), we set out into the storm. It was immediately brutal, and instantly soaked us. Cold, windy, and with pelting rain that drove from all directions. 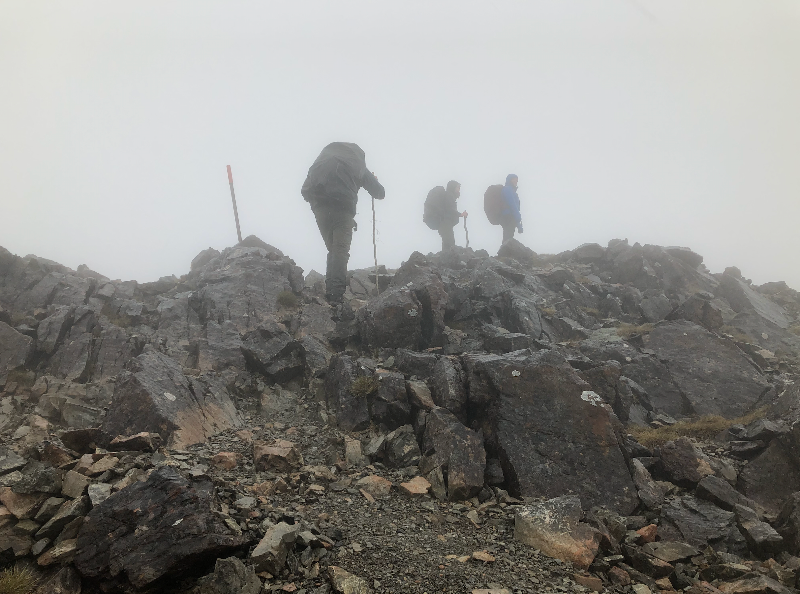 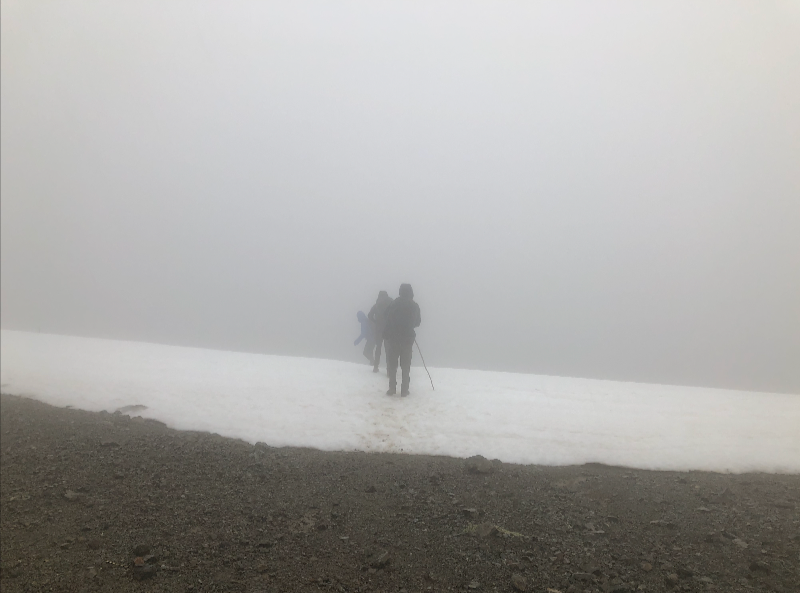 We eventually descended into a valley, where we'd basically work our way down from the mountain tops, following the route carved by millions of years of water flow. Toward the top, the stream was quiet and small. 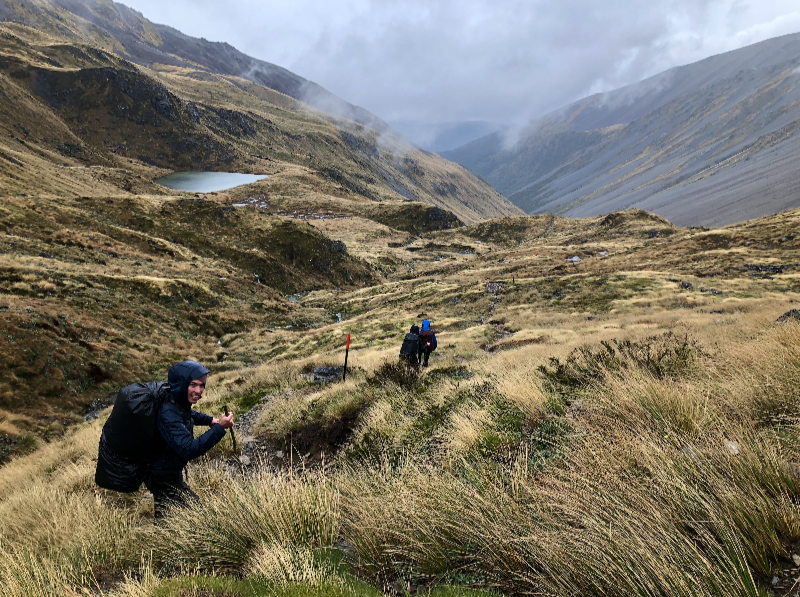 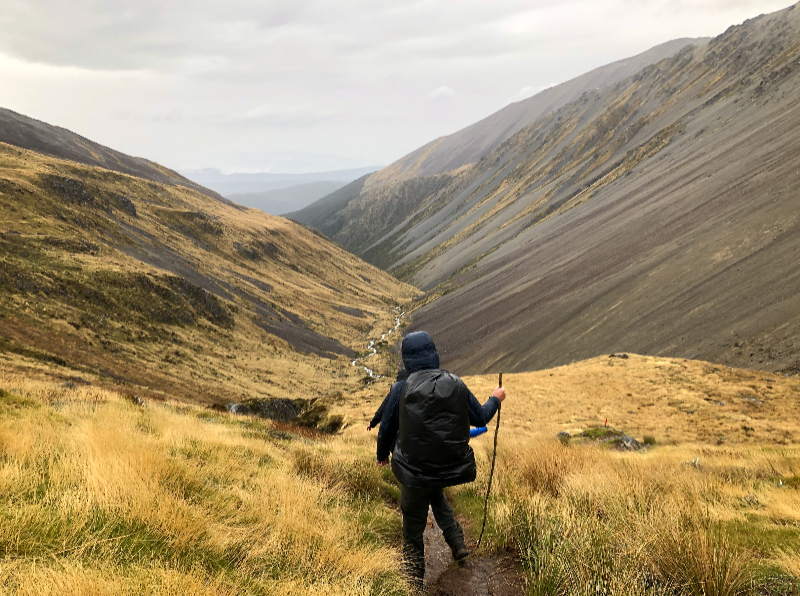 It was very, very wet, and my clothes were already mostly soaked through despite the rain gear. It turns out water repellent clothing wears out over time, and my jacket certainly did more than nothing but hardly was enough to actually keep me dry. Still, the view was gorgeous, and the people were fun.

Off in the distance, we could make a guess as to where we were heading. It was so wonderful to have a sense of how far we'd be traveling, and to see it in the distance. It's quite different from tromping through a forest, where you have no sense of the ground you can cover in a day, how to conceptualize 8 miles of ground to cover. What's visible in this photo was maybe half the distance of what we actually did. 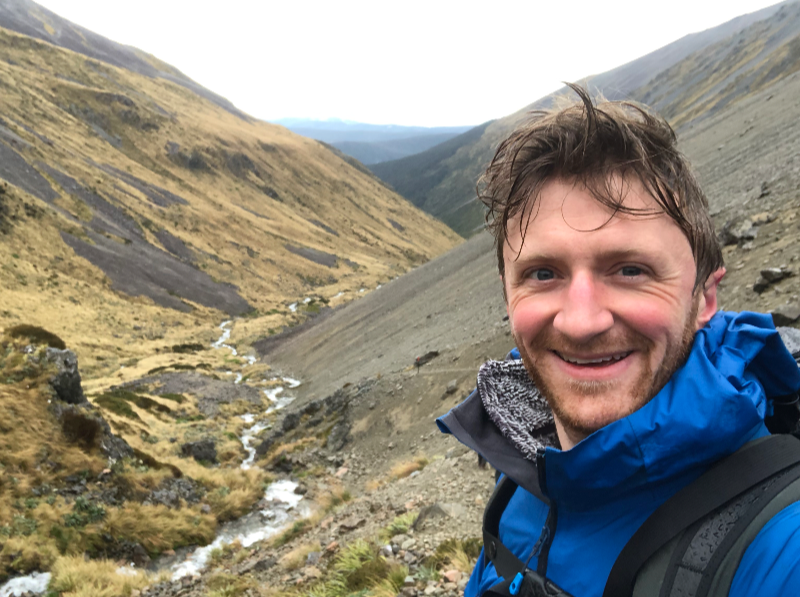 The terrain was sketchy and required carefully picking our way across slopes of rock slides. 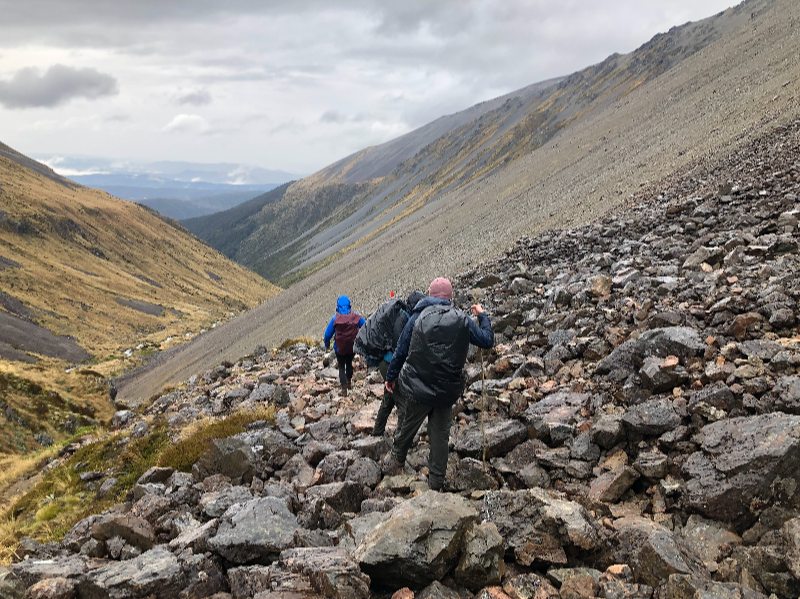 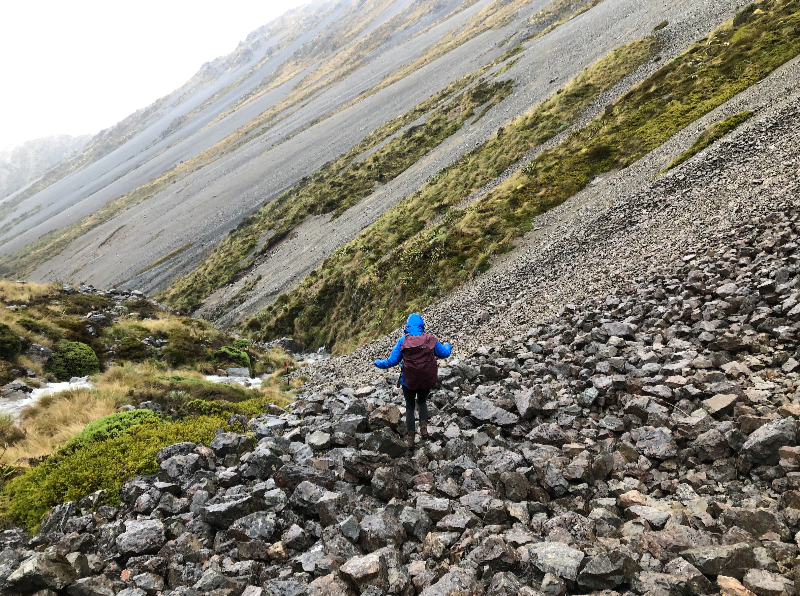 It wasn't long before we had to start crossing the river at regular intervals. This was the next phase of our journey, the water phase. The crossings were pretty manageable at first. As long as you kept moving and didn't try to balance on any particular rock, it was usually fine.

I was often the one to go first, since it turns out I was the most nimble and daring when it came to hopping across rivers. Might be slightly related to being a dancer. Who knows. Anyway, usually I was there pep talking Eric and Meg, who were the least sure-footed. On a couple of occasions I'd provide a hand to steady them as they made their own way across. It was fun to feel like I was taking a bit of leadership and providing the power of positive momentum to keep us moving forward. 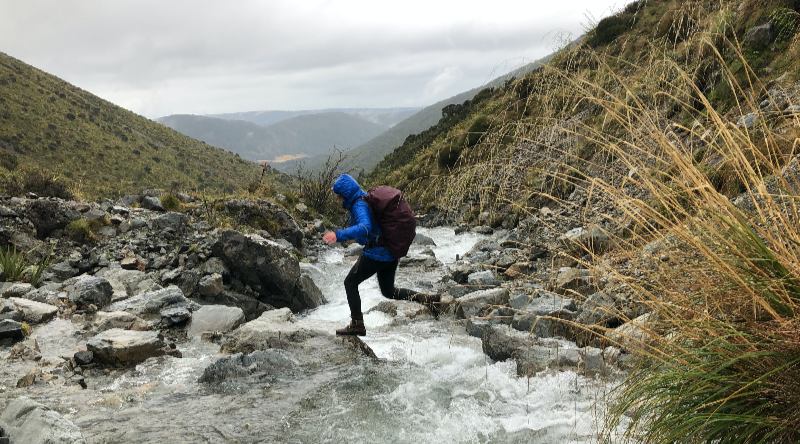 At one point toward the end, we ended up clambering across a fallen tree to pull off the crossing. All the while never falling in the river. (Certainly we could've walked through it, it wasn't particularly deep, but none of us were looking forward to sopping wet feet.) 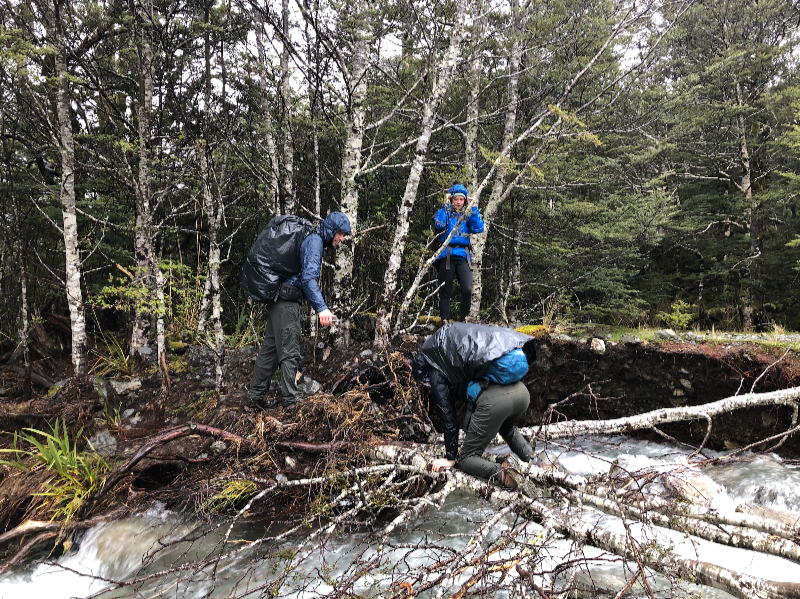 There was one crossing in particular that stood out to my memory. There was a big rock on the other side, but far away. With most crossings you can get away with something like a hop step. This one though required a full, bodily leap across the stream. Before anyone could talk me into being afraid, I launched myself through the air and landed on all fours on the rock, scrabbling up and away from the water. I then turned around and talked other people up, and would catch them as they leapt across so they didn't have to worry about sticking the landing to avoid tumbling off into the water. 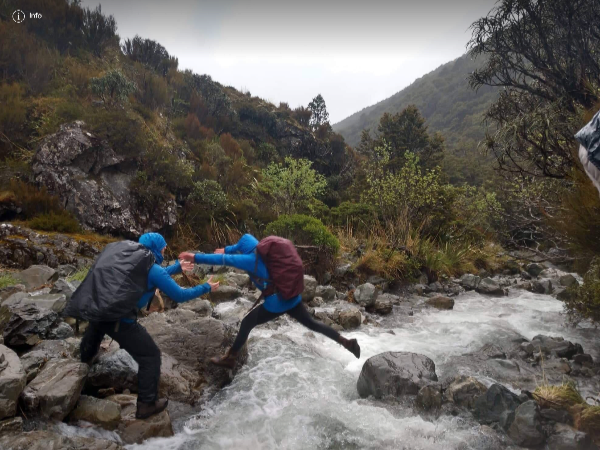 At last, toward the end of the water phase, we came upon a river crossing that was just too difficult. I took a stab at making it across, but the rock I was using slipped right underneath me and I stumbled backwards, topping my boots and nearly losing my balance entirely. The rest of the crew had to just bite the bullet and wade across. My boots and socks had already been pretty soaked from the rain, but now they were sopping and I could feel the squish, squish with every step. 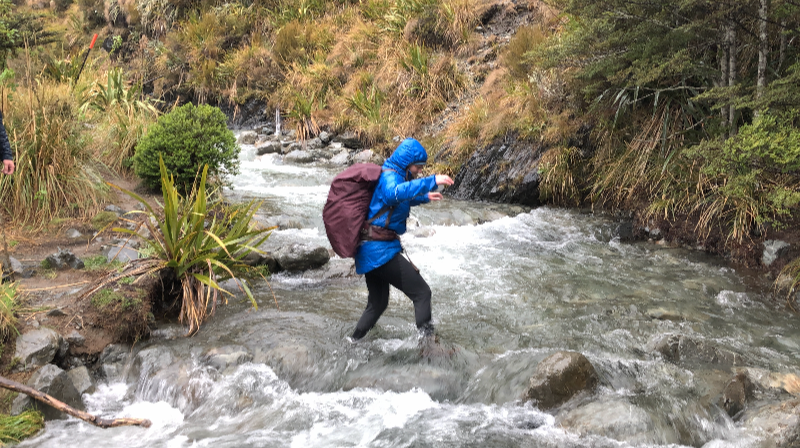 We finally made it to Speargrass Hut, the halfway point, and settled in for lunch and to wring out our socks and clothes. After a couple unsuccessful attempts to build a fire by other people, I set myself to carefully nursing a fire to live in the wood stove while others prepared hot food to share. I take a certain amount of pride in being able to make a fire, and I'm glad I didn't have to eat my pride this time along with my lunch. It warmed the space and provided needed comfort to everyone. 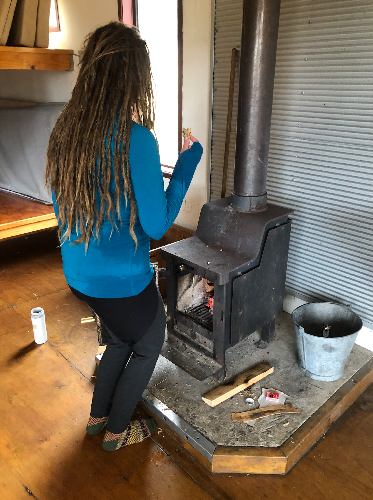 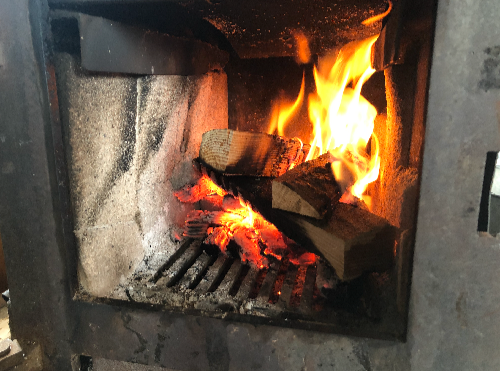 After taking some time, we set back out. None of us were pleased about putting all our wet, soggy gear back on. Still, we kept in good cheer, and the conversation always was flowing. Meg and Eric had proven to be really sweet, lovely people, and delightful company. It was a pleasant surprise, because so often when you meet strangers there's a point where you genuinely want to be done with interacting, and we didn't ever tire of one another. 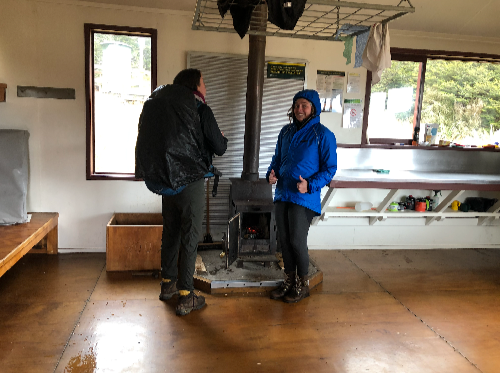 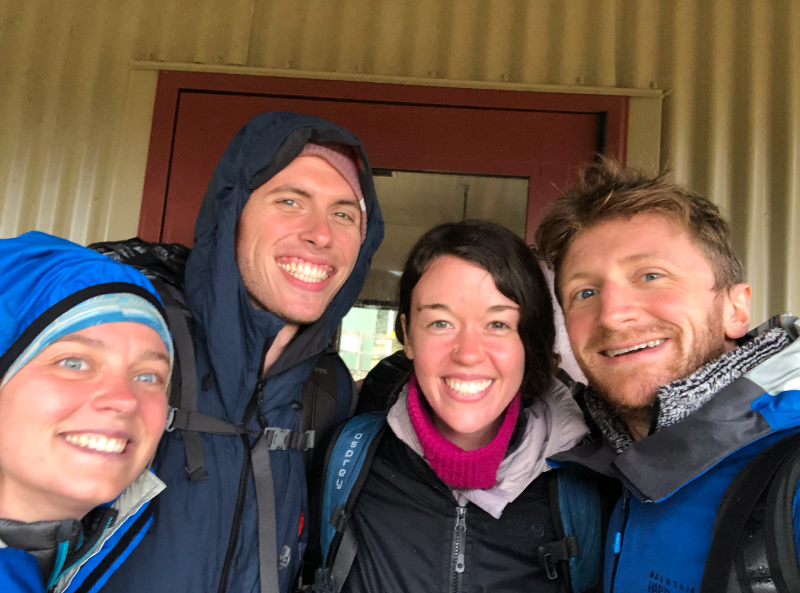 It was time to set back out into the forest. Looking back up the way we had come, it was satisfying to see the thick clouds through which we had hiked, now draping over the mountain like a blanket. 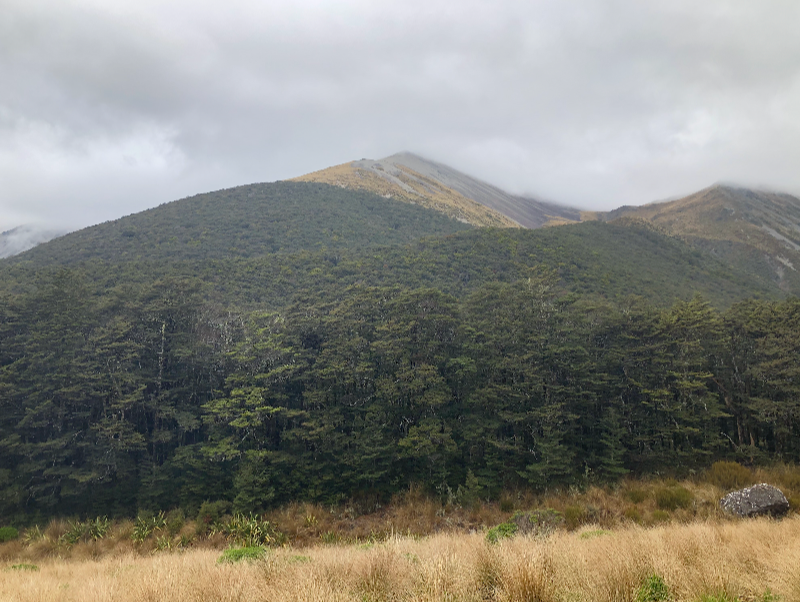 The forest path was usually obvious and marked, but still required careful navigation as the way forward was muddy and riddled with roots and large rocks to trip up feet. 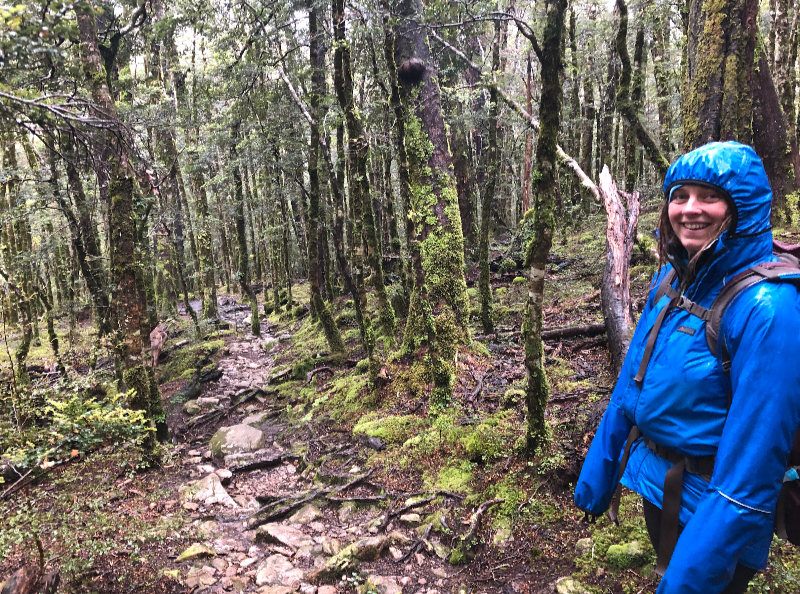 At one point, we reached an area where the path had been completely washed out from the storm. Where there used to be a hill to cut along the circumference, there was now a huge gash, a valley of rocks and scree to crawl down and then scramble back up. 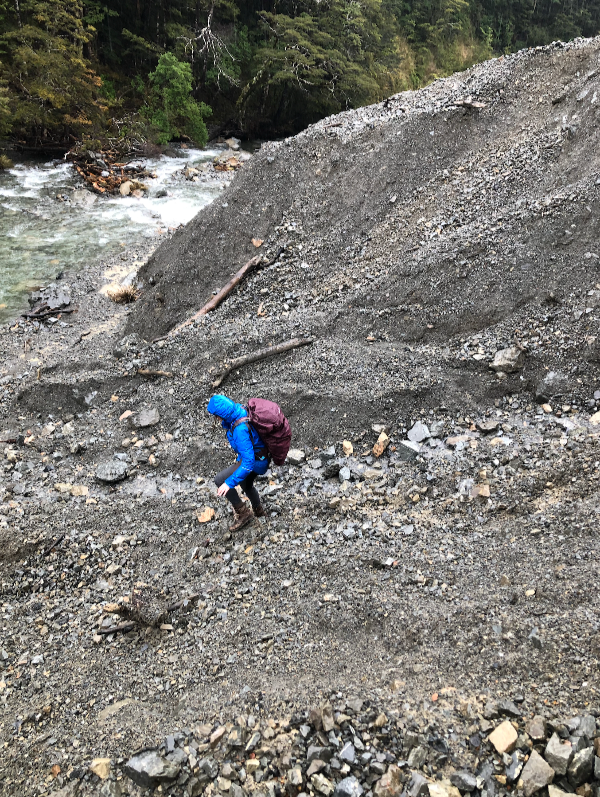 In another area, the land and route had been transformed by the storm. Normally the area we were standing would be flooded with waters, but presumably the wash out from above had changed the course of the river and diverted it in a new direction. 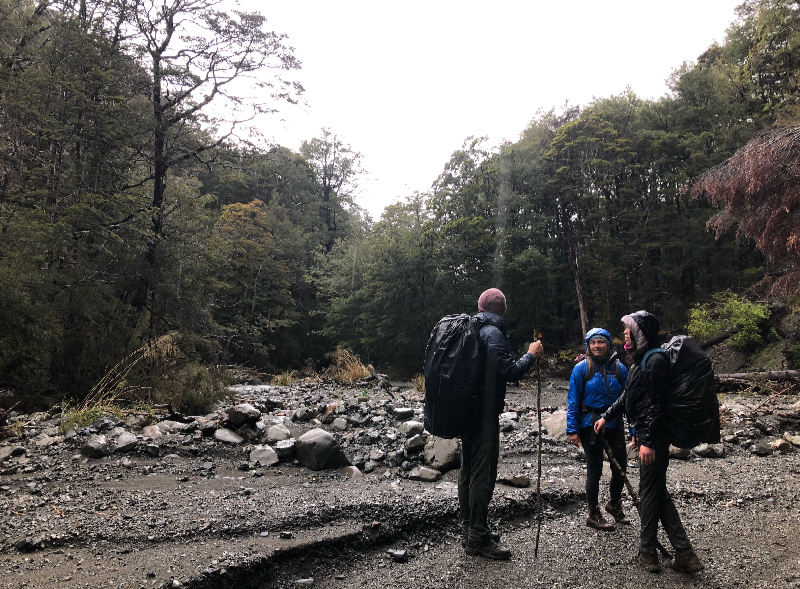 The final portion was challenging, hiking along a steep slope with only tree roots serving as our footholds. 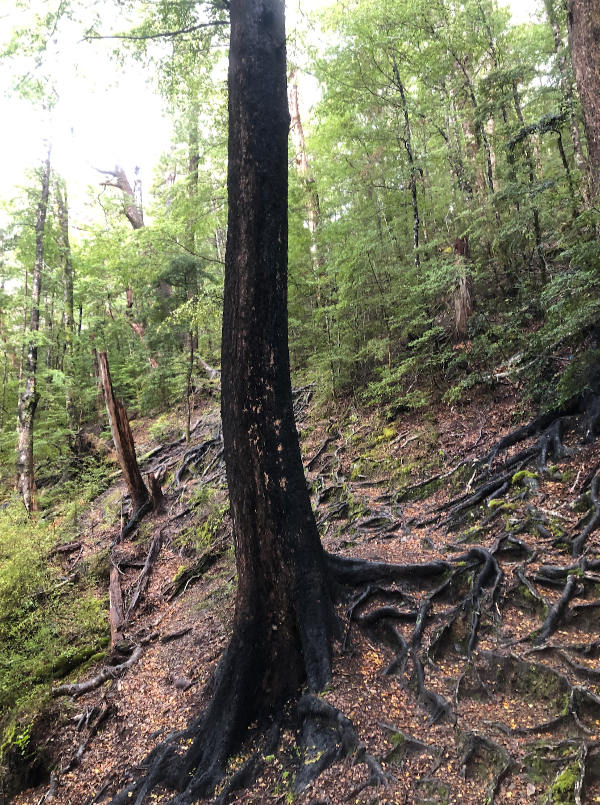 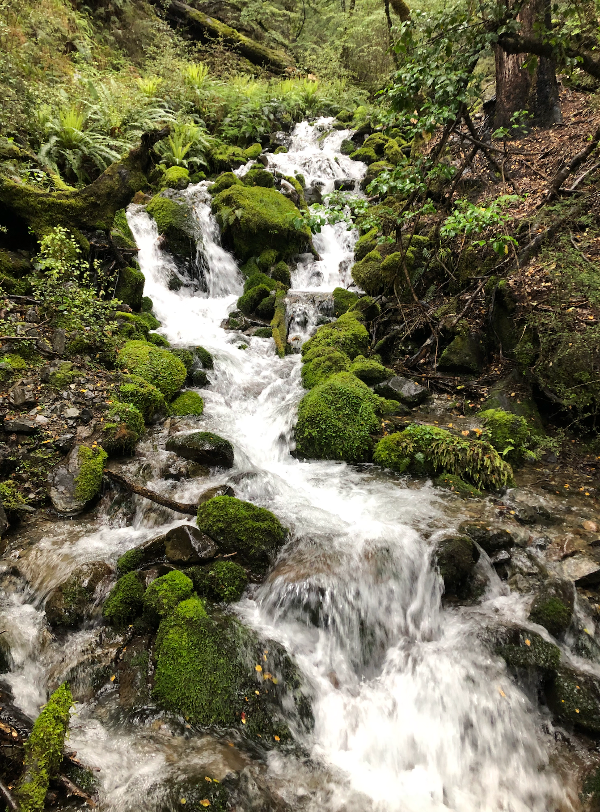 The hike itself would not have been so challenging and intense were it not for the wet and cold. The consensus among Meg and Eric and Shantel, all more experienced backpackers, was that this was one of the most difficult routes they've ever tackled. It just made me appreciate the beauty and rigor of hiking through the backcountry, where you don't have a maintained path to ease your journey.

When we made it back to the parking lot, we were all cheers and joy. We had made it through a demanding trek together as a team, and weathering those tough moments together made us draw even closer together. I hope to get to connect with them back in Portland once they return and to maintain the friendship. 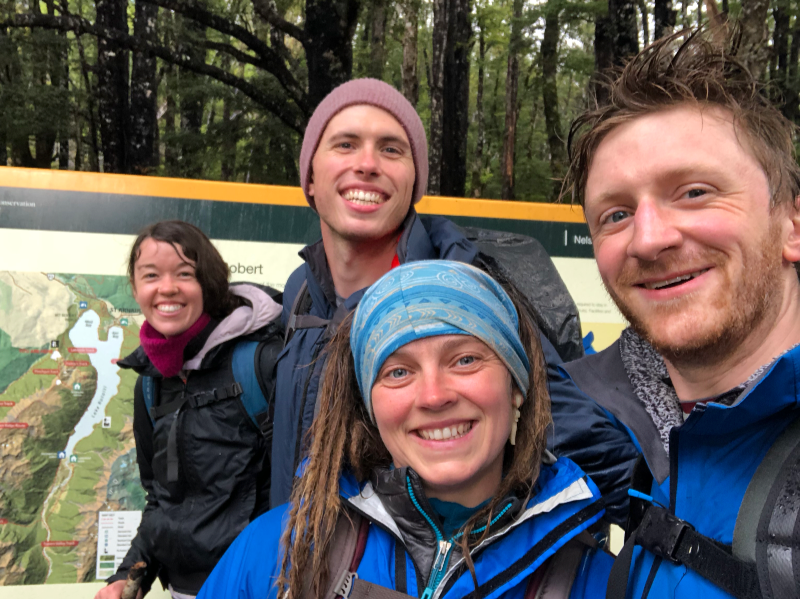