Oh Calabar. How exciting you are.

Destination #1: the hotel restaurant. For breakfast.

We brought our own food, but I was intrigued by their menu. Upon inquiry, however, it seems that 90% of the items in Nigerian hotels are not actually available. They say they are out, but I question whether they stock it in the first place. Here’s how it should read: 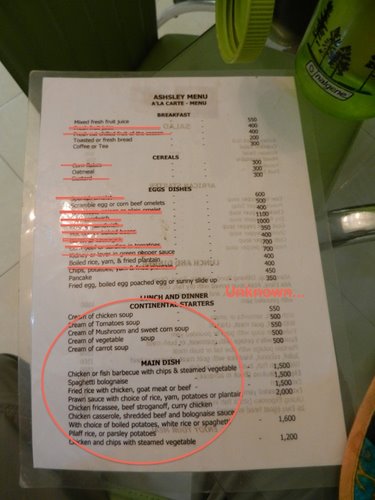 Destination #2: ocean marina and slave history museum. The legitimacy of this establishment is somewhat questionable, as the area is under heavy renovation thanks to foreign investment. All the more strange is its proximity to “Old Calabar,” which (from what I gather) has become the city’s ghetto. (In this photo, New Calabar is located up in the hills.) 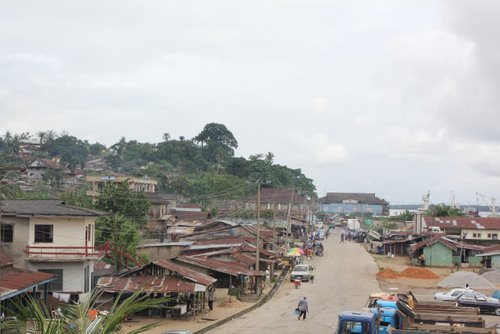 Picking up on a tradition beloved by Orlena, we posed for some more jumping shots. 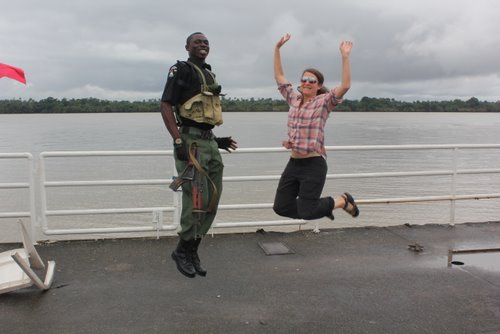 We even convinced one of our police escorts to pose. He didn’t get it at first… 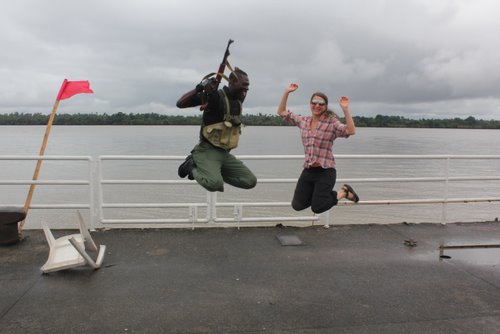 But then caught on.

Surprisingly, the highlight of this destination came in the form of a carousel.

That’s right: a merry-go-round, in Nigeria. We couldn’t NOT ride it. 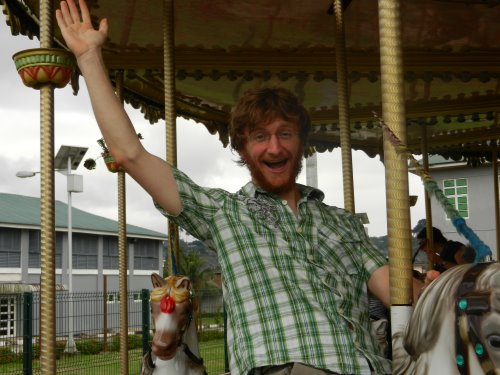 Again, our security detail joined us. This day was particularly enjoyable as we caught a glimpse of their humanity: letting their guard down just slightly to have some fun. Also, seeing a policeman on a plastic horse touting a loaded AK-47 is goddam hilarious. 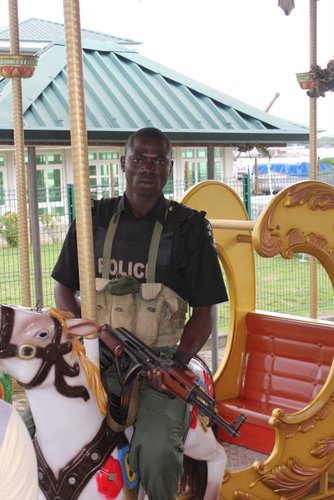 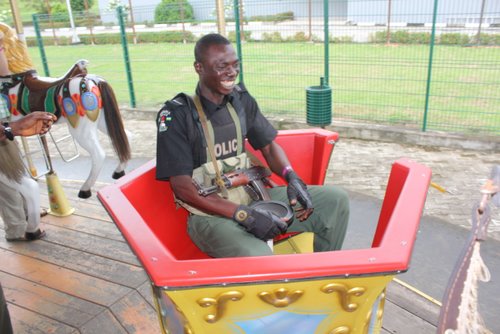 I also got some delightful video, which I (unfortunately) can’t upload right now.

Destination #3: the tree garden. The result of the governor’s beautification/touristification campaign, this green space offered a welcome respite from the city bustle. Some truly stunning vegetation around here. Air smelled so fresh and clean – the impact of trees on air quality is simply undeniable in a place like this. 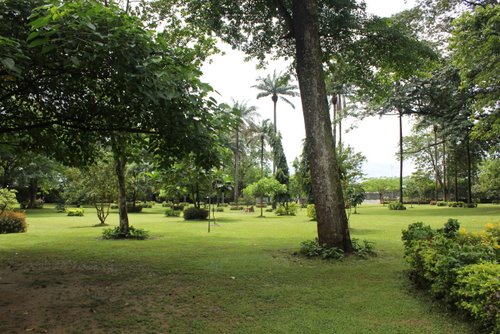 Note the person posing at the tree base for scale. 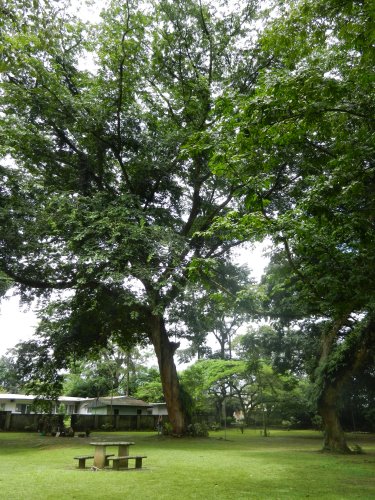 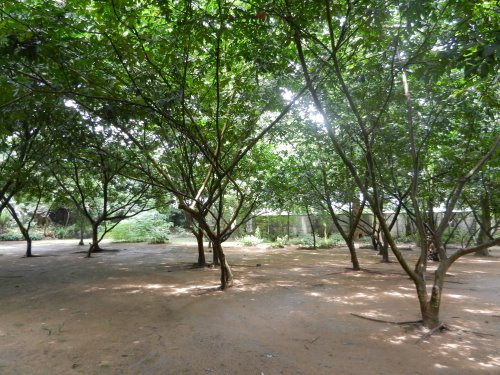 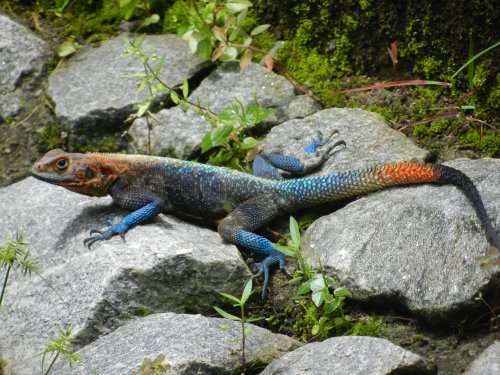 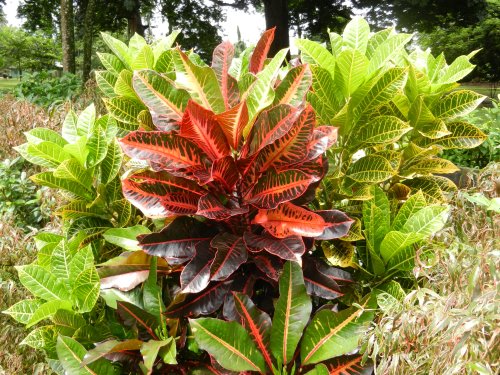 Destination #4: lunch break. Hard to believe it was already 2pm by this time? Well, keep in mind that these are highlights, hiding the 30-60 minutes of waiting for logistics/decisions/someone to show up/driving there/transactions to complete/negotiations over price/etc. that couch any activity. Choices for lunch were limited, but I settled on “pepper soup.” This is what “pepper soup” is: 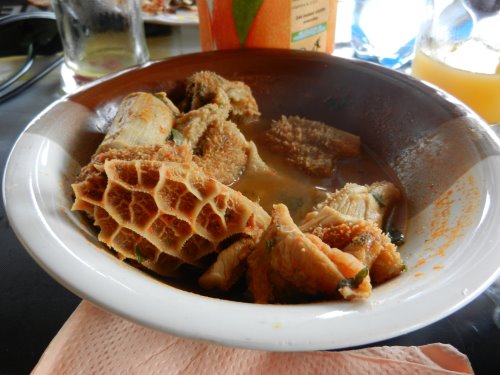 (Not pictured: a bowl of rice)

Ah yes. Cow intestine. My favorite! I was particularly excited about the freakish cellulosic brain-like membrane liner. I don’t even know why the fuck it has to look like that. (That was the worst piece; most of them just looked “fuzzy.”) I did eat it, though not all. It was… difficult. Lots of chewing involved. Surprisingly tasteless, though that may be from the overwhelming spice that obliterates one’s taste buds.

After lunch, we caught the formation of a wedding party. Music and dancing abounded, of course. (No good photos, though, sorry.)

Destination #5: cultural history museum. Touted as the “best museum in Nigeria,” it is (yet another) slave history museum. This one, however, is legitimate. Troves of relics from those dark times, transcripts of correspondence and shipping ledgers, furniture, antiques, clothing, etc. Two stories and way too much information to process in the brief time we allotted.

You purchase entrance to the museum in the gift shop. A sign on the window cautions against a (evidently common) social faux pas. 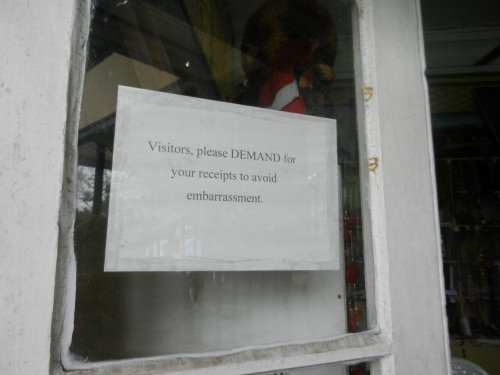 Destination #6: Tinapa business district. The result of foreign investors jumping on an opportunity that promised high ROI, the business district has become something of a ghost town. A testament to the ugliness of consumerism. A replica of Anywhere Surburban, USA. The district includes several retail warehouses, an arcade (that was somehow quite creepy), the Nollywood filming studios, a waterpark, and way, way, WAY too much fucking parking spots.

At best, it felt out of place, out of context, and out of proportion. You don’t expect to see a TJMax store in Calabar, Nigeria. Yet there’s one here. There’s a duty-free store that sells a bizarre assortment of items, including imported whiskey ($4 for a 750mL bottle), shoes, clothing, and tomato sauce. 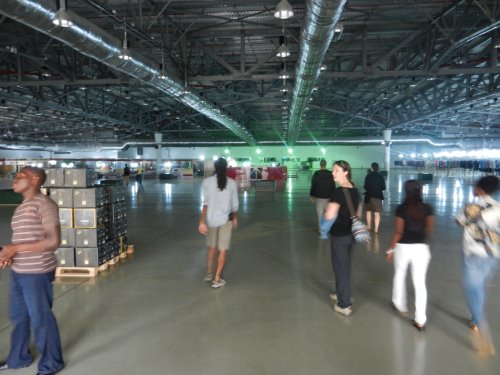 It’s evident that the district is going through growing pangs. It’s designed as a big-box store and anticipates mostly vehicular traffic, yet right now it’s small importing outfits that seem more like squatters than legitimate businesses.

Design of the landscape, parking lot, and roadway is surprisingly high-quality. Not sustainable, but certainly up to the standards for the US. Four-lane roads, wide shoulders, a sidewalk, underground drainage, culverts, sewer access, slope stabilization, the works. It is obvious that design work was done externally, probably in the U.K. or China. And I will give them credit for providing a high ratio of permeable/vegetated surfaces (for developed countries). 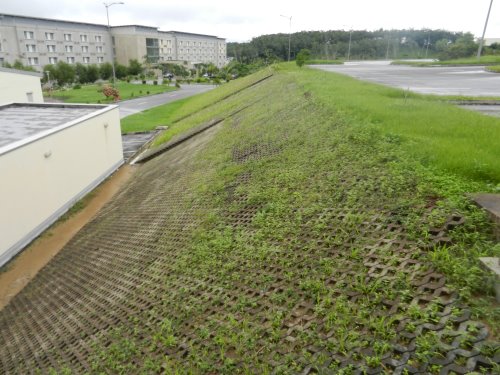 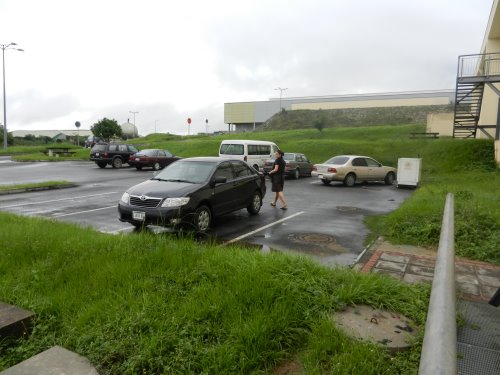 And all the while: the African bush in the distance. 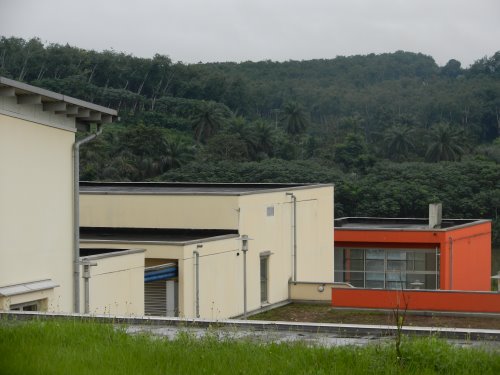 I am disappointed that I failed to capture the desolation in a photograph. It’s hard to convey visually. The feeling grows on you as you walk about the grounds, always walking, always on empty sidewalks or oversized plazas or through deserted parking lots. It insinuates itself in the negative space, makes you feel terribly alone. It was as if the zombie apocalypse had happened and this was the scene in the movie where we loot the department stores for supplies; all the infrastructure is in near-perfect condition, yet everything is dead. (Undead.)

A somber note of the trip, for sure. It’s hard to deal with, this monstrosity that is commercialism, asserting itself in an otherwise charming tourist destination. It makes no sense, it’s a disgusting waste of money, and it probably will never come to fruition. And I think that’s a good thing. Nuzrat, an architecture intern from Ghana, started crying about halfway through the visit. What a terrible waste of money, she said. They could have built a hospital, a school, a library, anything other than this. But that’s capitalism, for you: more concerned with constructing clothing warehouses than improving the literacy rate.

On to a lighter side. We resorted to various tactics to help process the experience. I bought a bottle of whiskey – I mean, for $4, it’s hard to pass up the chance to buy English whiskey imported into Nigeria under questionable circumstances – and we cracked it open in the vacant parking lot. It felt like something of a high school teen movie. 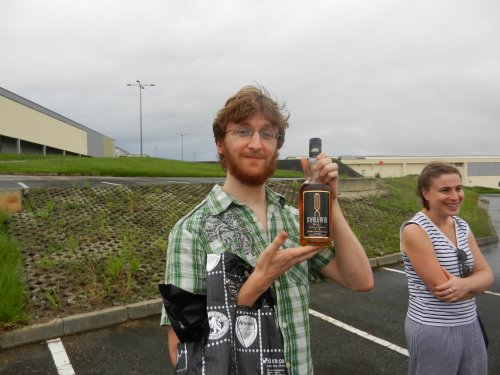 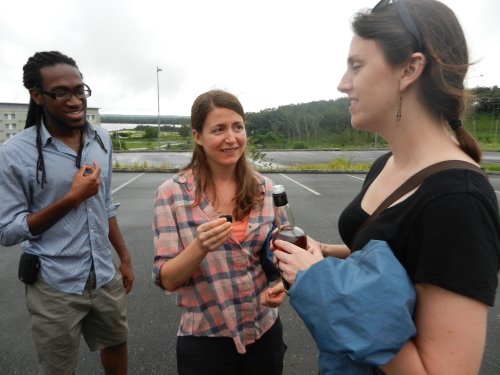 We paid a visit to the Nollywood filming studios. Pictured here: me holding up the globe, with King Kong holding a sign that reads, “NOLLYWOOD.” 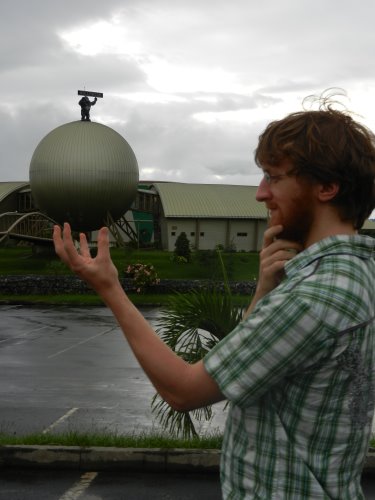 The studios were closed. They’re always closed, evidently, because no one is shooting movies there. And they don’t want to turn on the power (i.e. generators) unless they’re shooting movies, so no one wants to visit the tourist center. So no one comes.

The guard at the front gate let us in, though. He was a nice guy, chill. Again, to help deal with the desolation of this place, we made fun of it. Pictured here: the cover for the debut album of the Anam City Interns, if we ever decide to form a band. 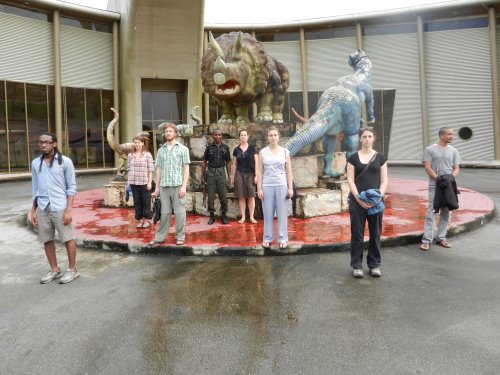 Came upon a huge outdoor plaza… (Those gnomes were creepy.) 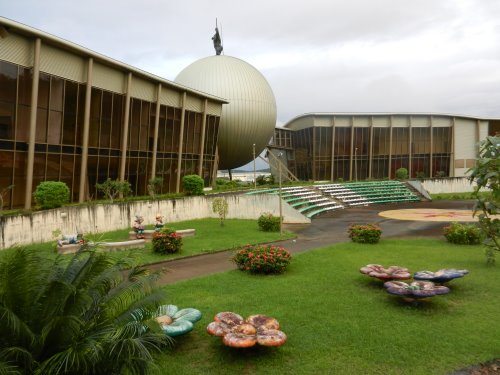 … took pictures of everyone jumping... 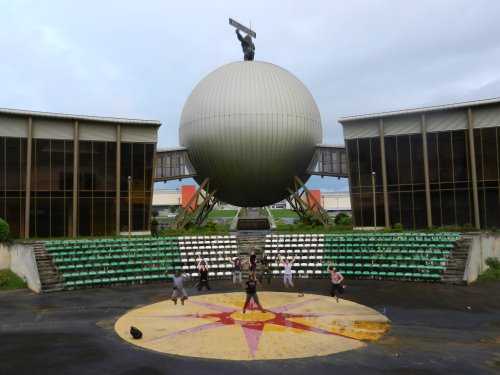 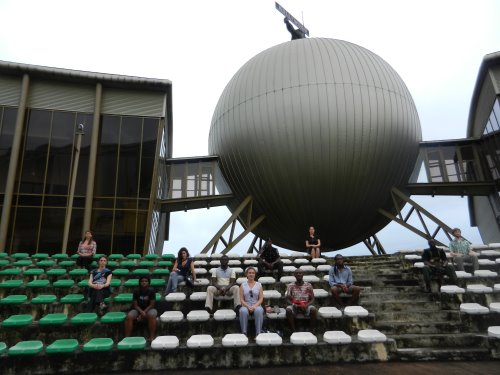 … and then got the hell out of there. Ugh. That place is creepy, depressing, nauseating, discouraging… so many bad things.

Destination #7: Apples, a fast-food restaurant. After eight weeks of eating potatoes and oil, and sometimes a morsel of chicken meat, I’ll tell you that it’s so freaking good to chow down on some quality fast food chicken. Big, juicy, smothered in spices, and mass-produced. It was an orgiastic feast for my mouth and stomach and I didn’t feel bad at all about it. (My digestive tract, however, did feel bad about it later. Unclear how much of it had to do with Apples, but I’m sure it contributed.) So. Good. Plus: ice cream. Oh my god. Plus: pastries filled with coconut and chocolate. They call them Choco-Pies. 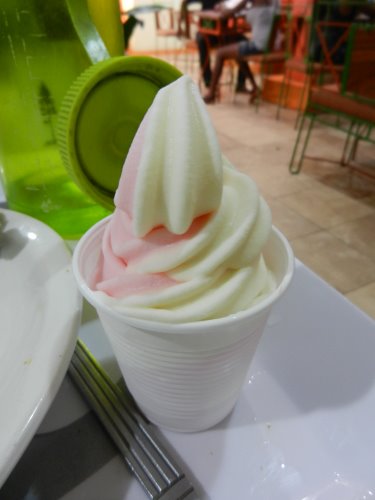 Destination #8: Genny’s, an outdoor bar that plays music until 2am. 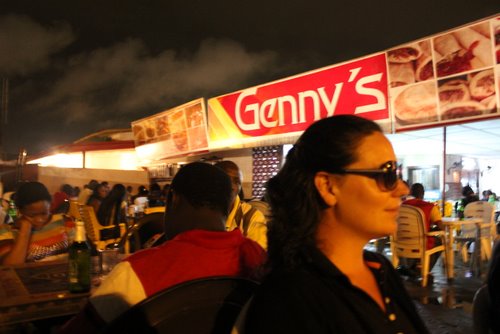 It was a fitting and relaxing way to end the day. We wanted to spend the night on the town, and we got it. Bright lights, loud music, and some booze. I smuggled in my whiskey, bought a coke, and served myself a shot or two (or three – I wasn’t measuring). 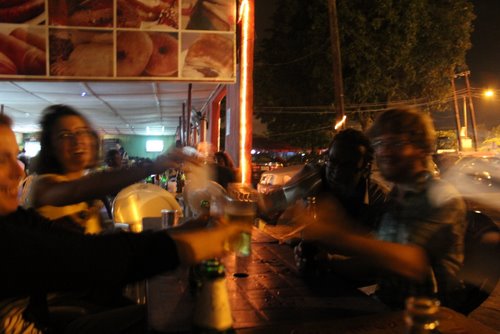 We tried to do photos, though not all of them turned out so well. (Heh, heh.) 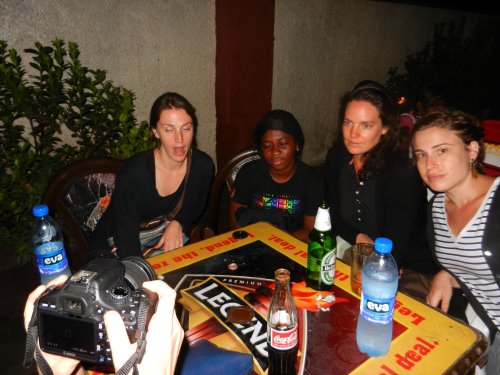 The Nigerians, as it turns out, have some of the best African music ever. Their local beats are so intoxicating it's almost impossible not to dance to the rhythms. While *everyone there* was just sitting around sipping cocktails, I got up and started grooving with three friends (with some goading). One was Nigerian, so it gave us some legitimacy at least. Pretty soon, a few other locals joined us so that we formed a makeshift dance space in the midst of it all. I could let loose and dance to my heart's content, something I haven't done in far too long.

Some locals came up to me and said they loved the way I dance. I took this as a high compliment; while I have studied blues and lindy hop (both share African roots) for seven years and took Congolese dance in the spring, I still worry about the authenticity of my movement. Their knowing recognition and approval of my hip movement made it all worth it: I don't just dance like a white guy. The next day, my Nigerian friend told me that our dancing got those locals grooving; normally a place like that isn't for dancing, but the locals joined us because they couldn't let some whitey foreigners upstage their dancing.

Being out there, seeing those people naturally move their hips the way that required months and months of intense study for me, I felt assured that I'm on the right path in dance. I've always trusted my dance coaches to steer me in the right direction, and (when I didn't understand it) taken the movements on faith. As time progresses and I study more African movement, I now understand the root of the movements they teach in Blues. It makes more sense to me now, seeing it outside of the bizarre social dance microcosm formed in the US. It’s not just something that someone told me to do – it’s the culmination of centuries of culture and movement and spirituality and expression and perseverance. 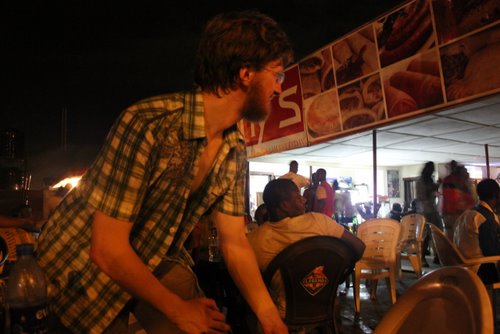 Destination #9: my bed. In an air-conditioned room. On a mattress that’s not sitting on the floor. Oh how sweet, thy sleep.
Posted by Andrew No comments: