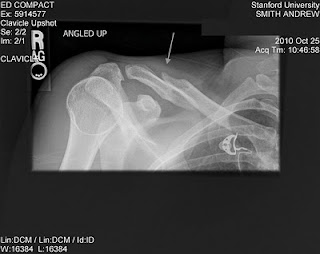 This is an image of my clavicle.

I fractured it on 10/25/10. Skidded out while descending a hill on my bicycle in the morning. No car strikes. The road was slightly wet. My fault for going too fast. Surgery may be necessary. The physical pain pales in comparison to the emotional anguish of my unfortunate choice to go ride my bike. No dancing (no ECBF! no teaching!), pretty much living one-handed, messing up my academic productivity... I can't cook, I can't type, I can't put on a t-shirt.

Since then, I've received an amazing outpouring of kindness, love, and support from friends. I cannot fully express my gratitude (as it's exceedingly difficult to type one-handed). Thank you all so much. You are carrying me through this challenging time.

That's about all I can muster for now. Hopefully I will get access to a dictation software soon so I can type faster.
Posted by Andrew 1 comment:

I applied for an officer position with Engineers for a Sustainable World (ESW). The position I chose was co-Director of Events, which is essentially to plan quarterly technical, social, and networking events for the group.

I went in for the interview. The position wasn't all that thrilling, but at least I'd be involved with ESW.

The two officers there told me they were very impressed with my resume and thought my talents would be better utilized elsewhere. They had just heard about a new project opportunity with excellent professional networking and long-term funding options. There is a request for proposals to design a solar-powered water delivery system for rural India. The officers said they wanted me to be the project leader. It's a project that will be exciting, challenging, and open-ended. And I could potentially go to India over the summer. I would be leading a team to submit a proposal, develop a design (if we win the funding), define the scope of the project, and lead a class in Winter and Spring quarters to get other students involved.

Step 1: submit a proposal and get funding. Step 0: make a proposal. Step ... uh... -1: figure out how the hell to design a solar-powered water delivery system.
Posted by Andrew No comments:

Email ThisBlogThis!Share to TwitterShare to FacebookShare to Pinterest
Labels: esw

Dance, food, learning, cycling, friends -- what more is there in life?

I'd just like to say that I frickin' love Stanford. This school is so crazy badass. I appreciate how they strongly encourage students to take classes outside their department/curriculum.

I say this because I am now taking not one, but two, dance classes. Beginning ballet and beginning hip-hop.

The ballet class is fun and challenging. The class is taught by Muriel Maffre, who seems to be kind of a big deal in the ballet world. She's originally from France, which of course instantly makes her a memorable instructor. I love the way she says "Plie." It cracks me up. A large class, predominantly female. I felt like a lot of eyes were on me because a) I was new in the class, and b) I'm male. Maybe that's just the raging narcissist in me speaking up, though. There's a range of skill levels; many have far superior flexibility but clearly lack any understanding of integrated movement. One point for me! Muriel said she could tell I've been dancing a long time and show an intuitive body awareness.

The hip-hop class is a lot of fun. I jumped in on the first class yesterday at the recommendation of a friend. It's taught by Ronnie Reddick. Again, as with most professors at Stanford, he's kind of a big deal, which will become obvious by scanning his background. I love watching him move, it's so beautiful. He kind of makes me think of what Barry would do to hip-hop music in a track suit. The class is quite large -- around 60-80 students. He throws down some challenging choreography for a beginning class. We also break up into smaller groups to develop our own choreography.

Classes in general are going well. I'm learning so much fascinating information. Some of it is depressing, some of it is enraging, some of it is encouraging. I can go through such a rollercoaster of emotions in the day depending on class material. For example, in 1997 the US allowed around 97 billion pounds of food to spoil. I've also learned how mining companies rape the land and screw the US thanks to the General Mining Law of 1872 that has -- for the most part -- remained unchanged. I've also learned that the earth does indeed have enough renewable energy to power our energy demands in 2030 and beyond. (We listened to a presentation by this atmosphere and energy professor that has been studying this since 1998 -- well before any of this green stuff became popular. He developed a plan for 100% renewable energy by 2030; it's been featured in Scientific American and used as a model for New Zealand's energy plan.) So, clearly, at least it isn't all just dispiriting news. It's definitely an intellectually stimulating environment. I love being around other students that are equally engaged in the pursuit of learning and facing the challenge. 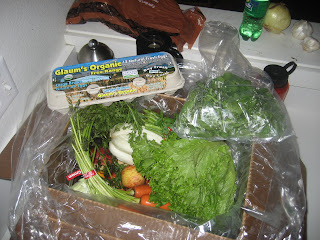 In other news, I've joined a CSA! This one is particularly great because you choose each week whether you want a food box. No more pressure of trying to cook everything every single week. I've found myself cooking a lot and coming up with odd combinations to try to use all my veggies. I haven't actually cooked any meat since I moved down here. I seem to get my weekly meat quota by dropping in on a free BBQ or something each week. I did notice today that my body was demanding more protein from all this exercise, so I may have to bump it up a bit. Still, though, I'm hardly spending any money on food since I cook a lot from scratch.

In the social realm, it's pretty funny how asocial some of my classmates can be. It's so easy to get sucked into the academic world, feeling burdened by schoolwork and never being able to go out. I am frequently inviting friends over for dinner, going out for some event, getting people to go to a dance, etc. It's a fun challenge and it has worked, for sure: I think I have many more connections and friendships established than if I had been passive. Still, sometimes I wish it wasn't such a hurdle to get them to go out and have fun. (Granted, the scales are different because I'm taking ~60% the course load of most of my fellow students.) 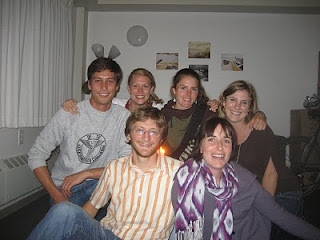 Here's a group of friends (most of them are in the education program, who are by far more socially active) that I am really glad to know. They're all good people. It's a complete reversal of my behavior and experience in undergrad, so I'm happy to be living up to my dream of "retrying" the higher education social scene.

The cycling here has been a blast. I signed up for the team and hope to race in the spring. They are a wonderful and friendly bunch of people. I've been going out usually twice a week, totaling ~60 mi per week, up and down a mountain each time. A photo doesn't quite capture the soul-crushing experience of seeing nothing but 8-10% uphill grade for four miles, but here's my best. 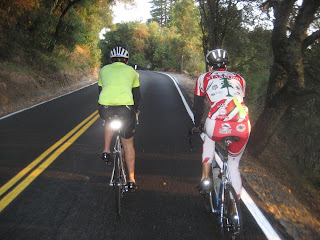 My speed continues to improve (15.8 mph on Wednesday last week!), though I still find myself struggling to keep up with their base, moderate pace. It has been quite humbling to ride with people considerably better than you. I wanted to share some views of the ride up. The joy of going out at 6:45 AM is that you get the sunrise on a fog-laden valley as you climb. (These pictures were taken while I'm riding up a hill on my bike, so you'll have to excuse my poor framing technique.) 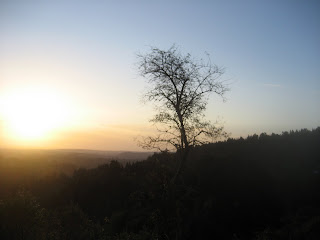 Use It Or Lose It: Dancing Makes You Smarter
Musings from a renowned Stanford dance historian and professor.

Guess I'm in the right business.

"Where are you going tonight?"
"I'm going to a weekly memory loss prevention event."
Posted by Andrew No comments:

I've done the ride a couple times before, but I was going slower; the difference between 14.5 mph and 15.0 mph is a whole world of hurt when you're dragging your ass up a mountain.
Posted by Andrew No comments:

Email ThisBlogThis!Share to TwitterShare to FacebookShare to Pinterest
Labels: cycling

It's emails like this that make me glad to be at Stanford and worried for our existence.

Most exposure to volatile organic compounds (VOCs) typically occurs indoors, and from common consumer products. Fragranced products, in particular, can emit a variety of VOCs. Relatively little is known, however, about emissions from these products, due to lack of prior study, complexity of formulations, and limitations and protections on ingredient disclosure in the U.S. This study investigated VOCs emitted from 25 widely used fragranced consumer products—laundry products, personal care products, cleaning supplies, and air fresheners—using headspace analysis with gas chromatography/mass spectrometry (GC/MS). The analysis found 133 different VOCs emitted from the 25 products, with an average of 17 VOCs per product. Of these 133 VOCs, 24 are classified as toxic or hazardous under U.S. federal laws, and each product emitted at least one of these compounds. For “green” products, emissions of these compounds were not significantly different from the other products. Of all VOCs identified across the products, only 1 was listed on any product label, and only 2 were listed on any material safety data sheet (MSDS). While virtually none of the chemicals identified were listed, this nonetheless accords with U.S. regulations, which do not require disclosure of all ingredients in a consumer product, or of any ingredients in a mixture called “fragrance.”

Results indicate a need for improved understanding of emissions from fragranced products, their links with labeling and legislation, and their potential effects on human and environmental health.
Posted by Andrew No comments: